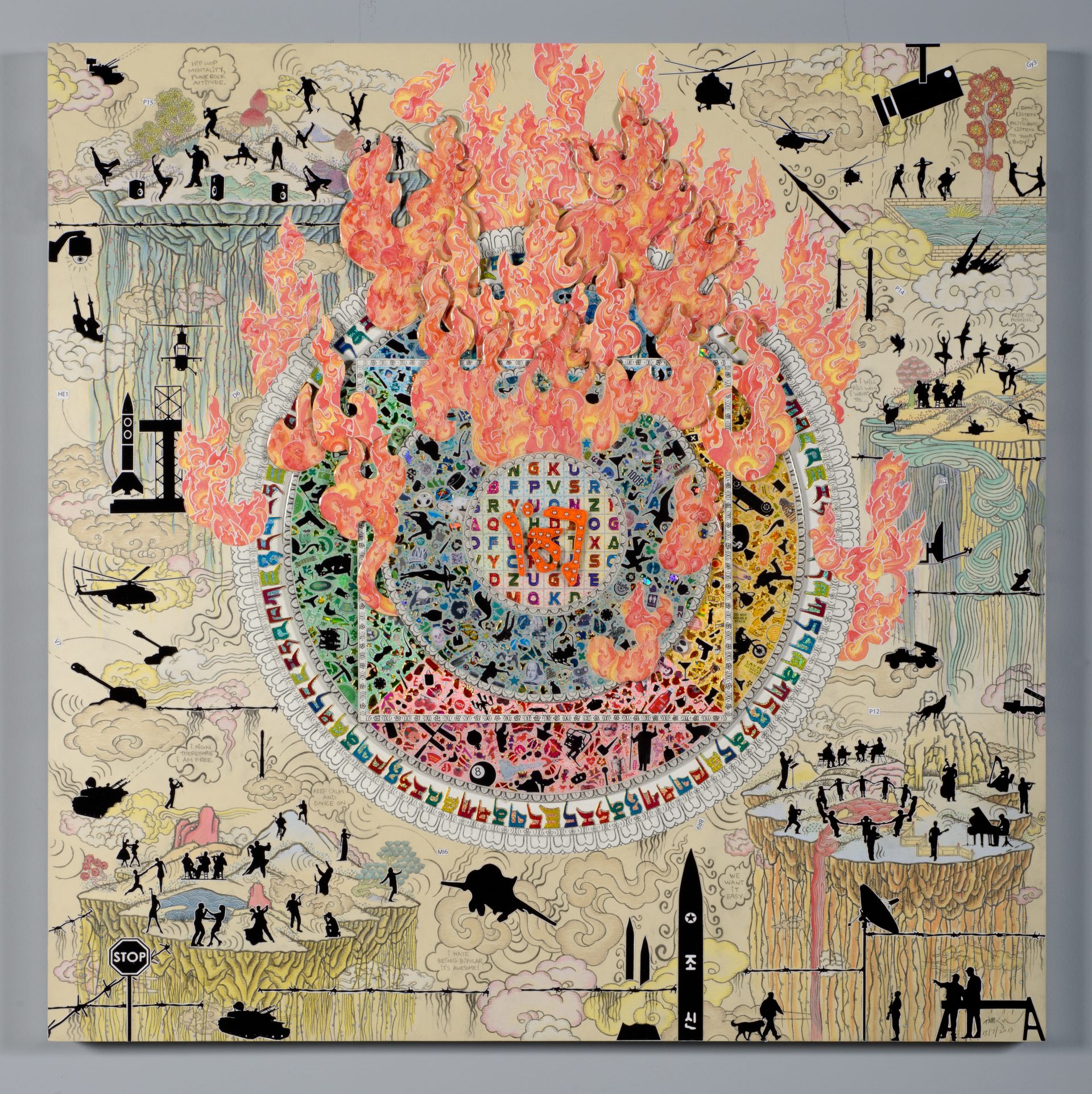 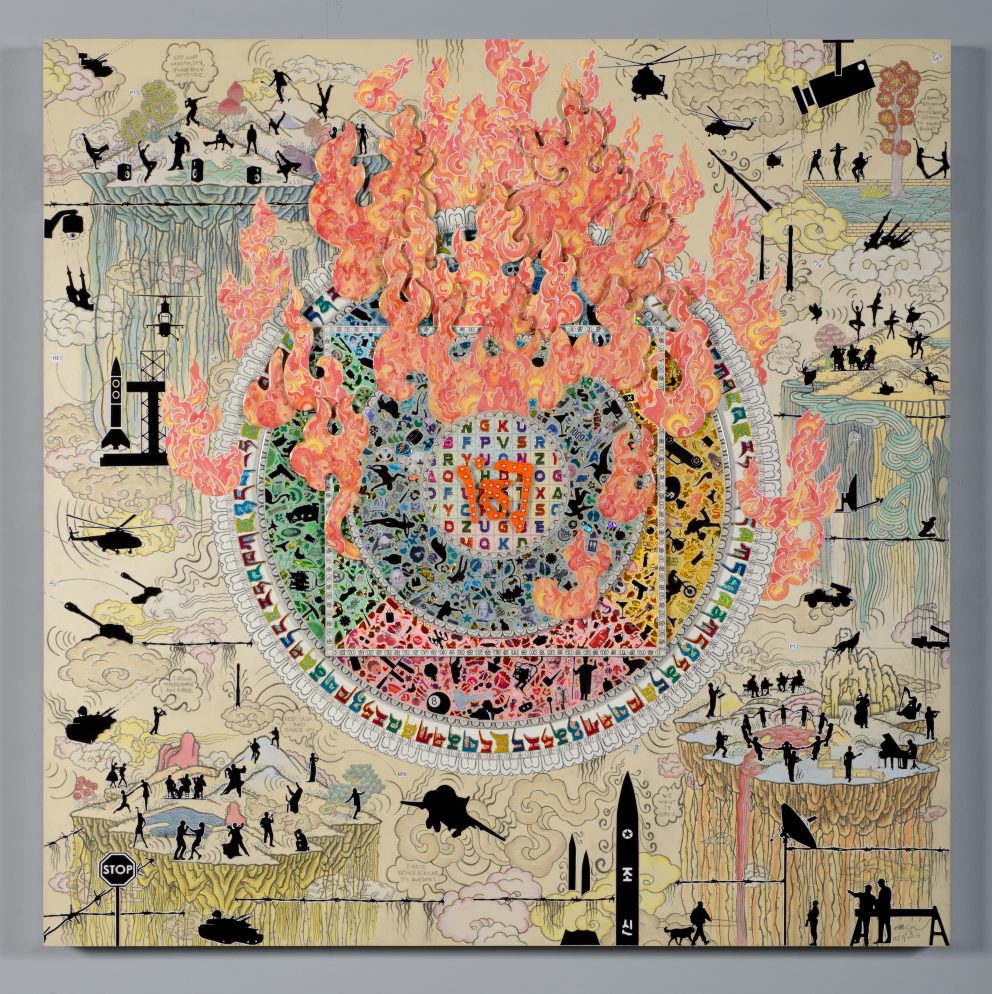 Appetite: While I was researching your work and practice, I learned a lot about the glyphs that feature in some of your pieces. I was fascinated by how they crop up in ancient rock art all over the world. How did you come across this archeological phenomenon, and what about them resonated with you so much that they’ve been incorporated into your art?

Ben: I questioned why I was doing what I was doing, and why artists before me did what they did. This led me to research one of the first works of human art – cave wall paintings. It was proof of a need to express symbolic thought visually, and even more remarkable is how these same marks and symbols were made independently all over the world. I find this very uniquely human ability to represent concepts with abstract signs inspiring.

A: What is the process involved in rendering these symbols into the plaster?

B: Plaster is a very easy and forgiving material. When wet, interesting textures can be made using trowels and scrapers, and when dry, can be sanded down or dug into. To best accentuate these symbols, I sanded the base plaster layer smooth before scoring in the drawings with wood carving tools. A final coat of resin is applied to fix the composition.

A: Additionally, a few of the titles of your pieces are references to mythological/literary archetypes and biblical allusions, and I’d love to learn a little bit about why these themes are significant to you!

B: A lot of the stories I was first exposed to were from the bible, and being brought up in a religious household, my values growing up were very attached to religious teachings and maxims. A lot of my first exposure to visual art was also in churches I would go to every Sunday. The biblical references in my work are a reflection of how stories of religious characters can shape you and how you see the world.

A: Your work touches on themes of human condition on scales that range from the anatomical, to the mystical/mythical, and to the inorganic environment we inhabit. What qualities of industrial drywall plaster renders it so versatile for engaging with these concepts?

B: Plaster as a medium does not have the same weight of tradition and history as say, oil or ceramic, and yet has continued to play an important role in art history – from Renaissance frescoes to the walls of contemporary art galleries. This contradictory detachment and dependency makes plaster a very fluid medium in exploring artistic themes and concepts.

A: Mythology (especially the Greek and Roman-derived canon of Western mythology) has a hefty legacy in visual culture, from Botticelli’s Birth of Venus  to Rothko’s concept of art ‘taking over’ the role that myths and ritual used to play in channelling ‘unconscious energies’. What’s your take on the ways myths might still serve us in a (seemingly) demystified world?

B: Acknowledging the commonalities in myths and ritual across cultures and time periods shows us that either everything is made up, or that nothing is made up. I find that hanging on to mysticism allows us to have more avenues for connection, something that is wearing thin these days.

A: Is there anything in particular you’re interested in exploring next that you haven’t yet tapped into?

B: I’m currently developing a series of bone china ceramic works. In the 16th century, Chinese porcelain became a cult item amongst the very wealthy in England. However, the journey the porcelain wares had to take meant that a lot of it would be damaged en route. So the English invented a form of ceramic that mimicked the appearance and characteristics of porcelain, made from a mix of animal bone ash and stone, and called it bone china. A form of porcelain could now be produced locally to feed the demand and being more affordable, flooded the homes of the masses. Today, the largest producer and cheapest supplier of bone china is China.

The new series will explore themes of industry and production, and made using the technique of slip-casting liquid bone china in plaster molds, borrowed from the factories that mass produce ceramic tableware.
Close

As a founder of Gerakan Seni Rupa Baru, or the “New Art Movement,” Harsono has been a staple in the Indonesian contemporary art scene for almost half a century. He pioneered a wave of hyper-political art under a regime that forcefully depoliticised art. Physically, Harsono’s early work also distinguished itself from the traditional bounds of Indonesian art; he and the other Gerakan Seni Rupa Baru artists utilized everyday objects in their work, channeling the “ready-made” branch of art, made famous by Marcel Duchamp in the early 20th century. Works like Harsono’s Paling Top ‘75 (1975), which featured a toy gun in a wooden crate, overtly tackled the breaches of freedom that Indonesians faced every day.

Rising political tensions led Harsono to larger and more performative works like Destruction (1997), in which the artist publicly burned and destroyed the masks of the three legal political parties.  The work called attention to the fraudulent electoral system and the long-time abuse of political power.

In the late 1950s, martial law was declared in Indonesia. Anti-communist politician Sukarno became president, and was succeeded by army-officer Suharto. The autocratic nature of Suharto’s presidency, called the New Order, came with great economic prosperity, but severe abuses of freedom. His rule was characterized by widespread propaganda, corruption, and human rights violations. Chinese Indonesians, or Tionghoa, were forced to assimilate: they were required to adopt Indonesian names, abandon their traditions, and were banned from speaking Mandarin or practicing their religion.

The fall of the Suharto regime in 1998, while a turn toward a more democratic government, was accompanied by extreme cultural strife. Rioting and violence ensued, especially that which was directed at minority groups. Chinese Indonesians, in particular, were brutally victimized and killed.

With this transition, Harsono — who is himself Chinese Indonesian — has allowed his work to take a turn toward the introspective. For two decades now, his art has been reflecting on the lost lives and traditions of his historically marginalized community.

While Harsono’s work addresses the Chinese Indonesian experience, the issue of diaspora resonates with a global audience — not only in the present, but in the decades and centuries leading up to now. In our research we came across other  artists whose work exhibits similar formal qualities, as well as cultural and art historical significance. In considering the integration of language in art, for example, one might come to think of Moroccan contemporary artist Lalla Essaydi. In her photographs, Essaydi engulfs Muslim women with Arabic calligraphy using henna. Like Harsono’s traditional Chinese characters, Essaydi’s all-consuming text carries symbolic and cultural weights. The juxtaposition between the traditionally female art of henna and the male practice of calligraphy reminds us of the pervasive gender norms in Iranian society, yet subverts them in allowing the women to “speak.” A similar use of language appears in the work of Shirin Neshat, an exiled Iranian artist who works primarily in photography and video. In the series Women of Allah (1994), she wears a chador (the traditional Islamic veil) and covers all of her exposed skin with Iranian poetry. Here, language implies depth: the intricacy and meaning of the poem implies inner dialogue and self-actualization. Neshat presents the Women of Allah as complex individuals, as more than the surface-level assumptions that may be made about them.

Neshat, like Harsono, utilizes video as a medium. Rapture (1999) presents a world in which landscape is separate from architecture, representing the cultural divide between Iranian men and women. The women cross a desert to the sea where they board small boats, while the men are stuck in a fortress, wrestling. Neshat comments on the reality of exile and the fantasy of freedom, particularly for women. Critic Eleanor Heartney describes how Neshat “makes art through her identities as an Iranian and as a woman, but reshapes them to speak to larger issues of freedom, individuality, societal oppression, the pain of exile, and the power of the erotic.”

Essaydi, Neshat, and Harsono all use language as a means of communication, but also as an emblem of cultural identity. Harsono makes us question: what components of culture — like language, an article of clothing, a recipe — connect us to our heritage? In addressing and speaking to political strife, tensions, and persecution, how might we reimagine our pasts and shared identities? Writing in the Rain confronts the realities of diaspora, and raises an issue that exists across time and humanity: how do we honor our pasts and still survive the pressures of the present?