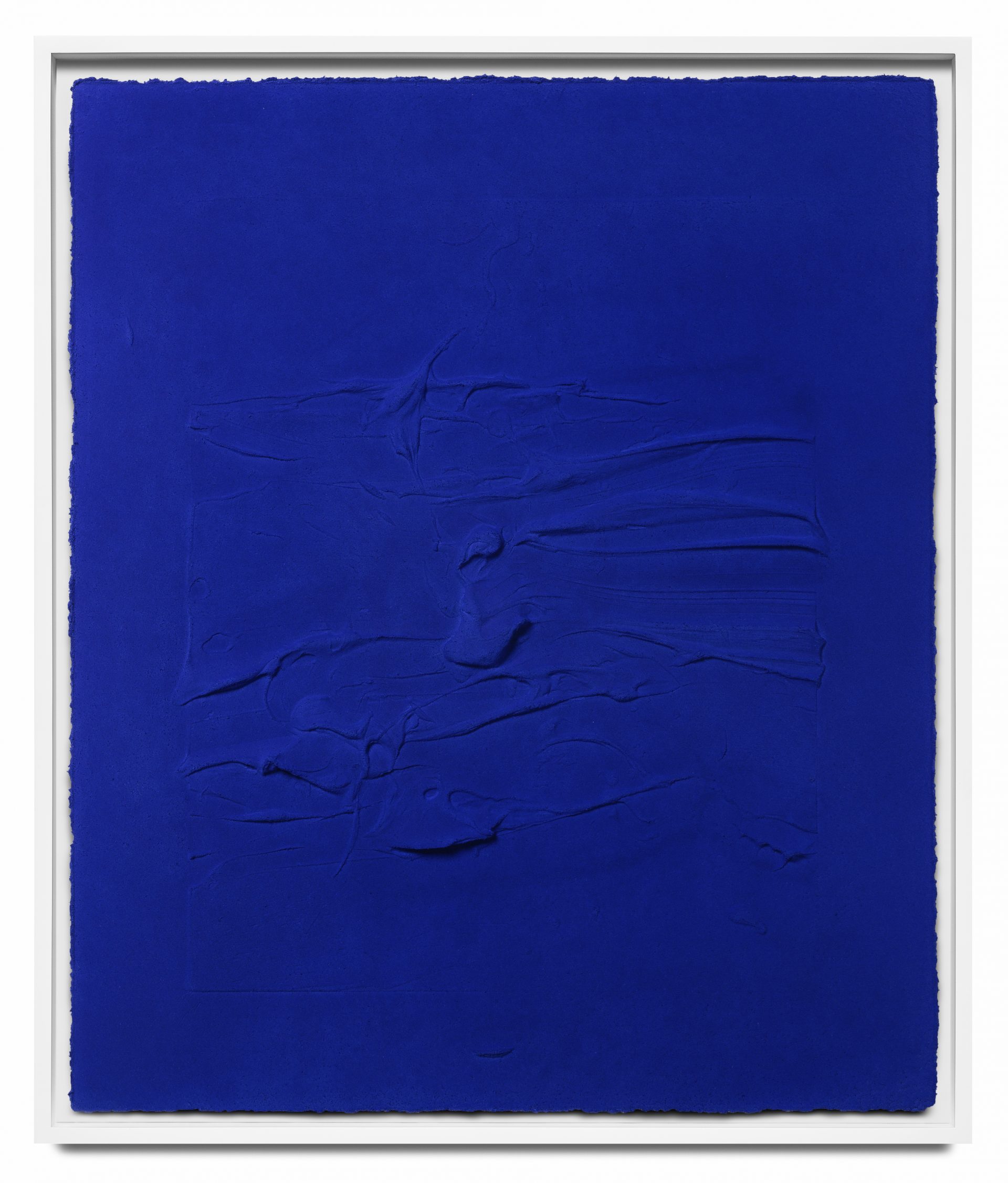 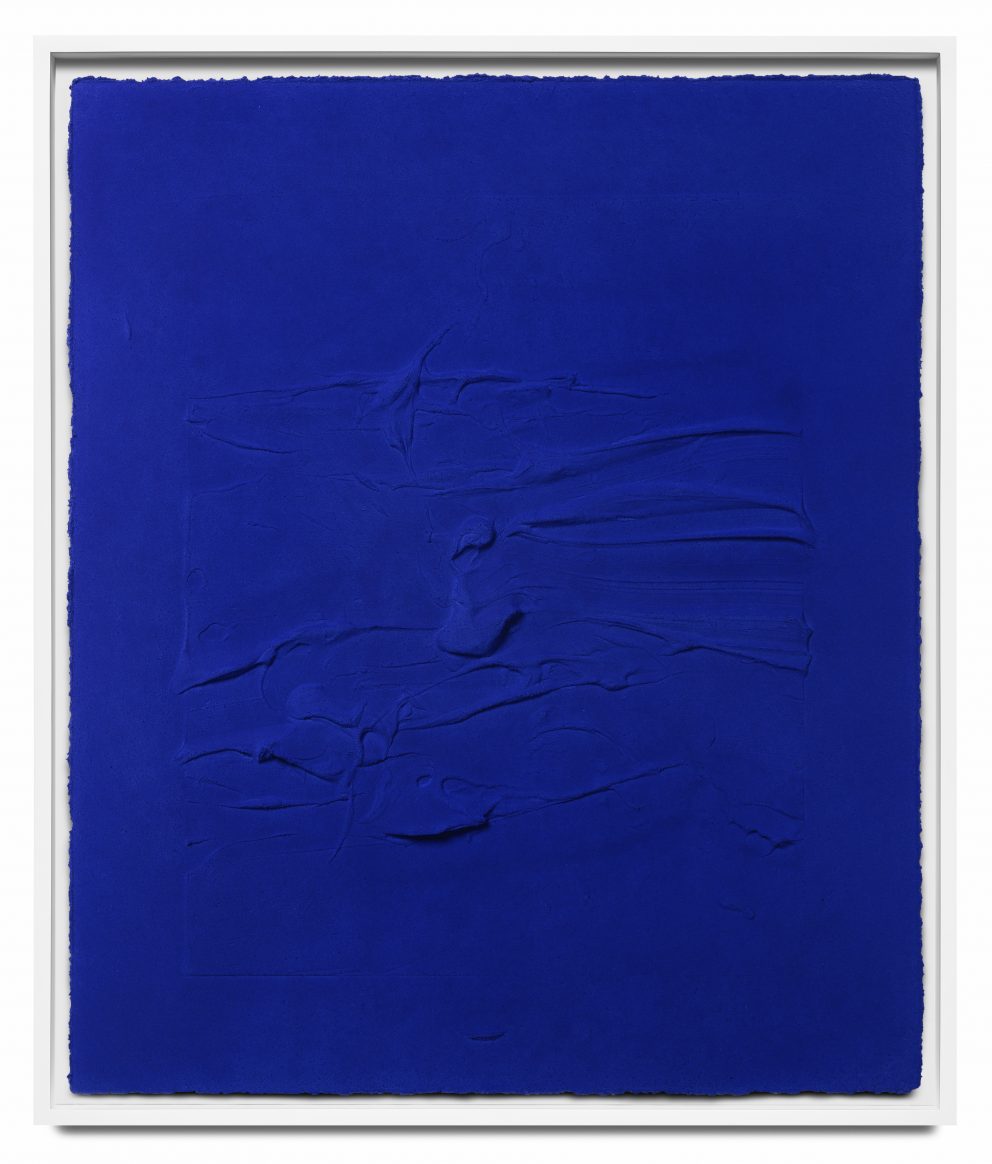 A frequent traveler, she maintains a focus on the socioeconomic, political, and cultural histories of her worksites as a central source of inspiration. Her site-specific wallpaper installation Coordinates of Speculative Solidarity (2019) for Miami’s The Bass, for example, contends with the city’s precarious position in the face of climate change-induced severe weather, and the location-mediated unity that results from such events.

After graduating from Goldsmiths College in London in 1993, Martin began honing a very particular painting practice. Using a fine comb, the artist would sweep oil or acrylic paint across aluminium, stainless steel or Plexiglass to create swirling, monochromatic compositions, as in Detox (1999) and Lover (1997). 1997 marked Martin’s breakthrough exhibition: “Sensation: Young British Artists from the Saatchi Collection” at the Royal Academy of Art in London, where he stood out for the lack of figuration in his work. The Young British Artists (YBA’s) began exhibiting as a group in 1988 and became known for their shock factor, experimentation with materials and processes, and entrepreneurial savvy. The members dominated the 1990s art scene, and to this day are some of the world’s most successful contemporary artists.

In the 2000s, Martin began to blur the boundaries between painting and sculpture through his use of metal casting. For works like Sloe (2013), the artist raked plaster across a flat surface then cast it in nickel to create an unctuous, sculptural fossilization of mark-making.

Although he creates an intentional ambiguity between painting and sculpture, Martin holds color as a central thread across his practice. The artist returned to oil in recent years, exploring harmonic relationships between hues, as included in titles such as Untitled (Titanium white/ Prussian blue/ Scheveningen black) from 2018.

Tiravanija’s work is a part of major public collections such as Guggenheim Museum, MoMA, Museum of Contemporary Art Los Angeles, and TATE London. He has exhibited at renowned institutions such as the Musée d’Art Moderne de la Ville de Paris, Chiang Mai University Art Museum, the Philadelphia Museum of Art, and has participated in the Whitney Biennial (1995 and 2005) and the Venice Biennale (1993, 1999, and 2015). The artist was awarded the prestigious Hugo Boss Prize in 2004.

The artist also engages with the natural environment to rethink different modes of life through collective experimentation. Co-founded by Tiravanija in 1998, The Land Foundation is a rural site outside Chiang Mai, cultivated as an open space with the intention to grow community, discuss agricultural philosophies, and implement renewable energy technologies. The foundation stems from Tiravanija’s interest in art as a non-commodity, as a way to imagine other modes of living. By establishing The Land Foundation, the artist challenges the conception of the artist as property, art as capital.

Tiravanija explores similar questions of social and political geographies through language and text. The “Less oil more courage” works from 2003-2015 allude to protests against Bush’s invasion of Iraq in 2003.

In 2016, Rondinone’s public sculpture Seven Magic Mountains opened outside of Las Vegas, Nevada, produced by the Nevada Museum of Art and the Art Production Fund. Other prominent solo exhibitions include shows at the Tate Liverpool, the Arken Museum of Modern Art in Ishøj, and the Rockbund Art Museum in Shanghai. Along with Urs Fischer, Rondinone also represented Switzerland in the 52nd Venice Biennale in 2007.

Mark Chu is an Australian painter who has exhibited in New York, Shanghai and Melbourne. He has been photographed for the New York Times, and enjoyed portrait sittings with luminaries such as French DJ Laurent Garnier. Chu is an accidental polymath whose interdisciplinary rigor spans significant breadth. He has recorded two concertos as a piano soloist with the Melbourne Symphony Orchestra. Completing his Criminology BA, Chu reviewed restaurants for Melbourne’s premiere dining publication The Good Food Guide and wrote fiction in The Lifted Brow. During his fiction MFA at Columbia University, Chu worked closely with the Atlantic City Arts Foundation, contributing public murals and editing an art book of intimate interviews which chronicled art’s civic importance during economic downturn. As a founding member of Comp-Syn, Chu has co-authored papers in computer science, and is currently working on quantifying interdisciplinarity.